“OMS cut at least a full day off restoration time, maybe a day and a half.” Howard agrees, “It just made everything flow that much easier.” 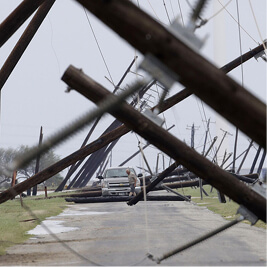 Preparing for the Storm

Colquitt Electric Membership Cooperative has been keeping the power on in Southeast Georgia for over 20 years. Currently, Colquitt offers the services of approximately 170 employees to meet the electric energy needs of more than 42,847 members in a seven county area (Berrien, Brooks, Colquitt, Cook, Lowndes, Tift and Worth counties), with 65,000 meters spread over 8,395 miles of distribution lines. Colquitt EMC’s service area has been subjected to numerous tropical storms over the years, most recently Hurricane Hermine, the first hurricane to hit land in Florida since Hurricane Wilma in 2005. While Colquitt EMC took every precaution to prepare for the storm in advance, the eye of the storm went right over their system, knocking out more than half of their meters.

The eye of Hurricane Hermine sat directly over Colquitt EMC’s service area in this Weather Channel graphic. During the storm, over 38,000 Colquitt EMC customers were without power.

By September 1, 2016, Colquitt EMC had assembled a team to tackle the potentially high volume of storm outages that typically accompany a hurricane. The co-op had sixteen of their own crews, eight Field Service Representatives (FSR’s) from Mitchell EMC in Camilla, Georgia, and a construction crew from Coweta-Fayette EMC out of Palmetto, Georgia. Their workforce plus the additional help from surrounding utilities gave the utility around ninety linemen out in the field. Colquitt started to receive the first wave of outage calls from their consumers around 9:30-10:00 that evening. Colquitt’s GIS Manager Scott Howard recalls, “The calls were coming in just a few at a time. Not much at all. The dispatchers were able to handle them by themselves, at that point.

“The storm hit around midnight Thursday, Friday morning,” Howard goes on to say. “We had some guys working out in the field till about 2:30 a.m. Then the conditions got too bad for them, and we had to call them in. We regrouped with everyone at 6:30 Friday morning. Most of the storm had passed through by daylight, and the winds had died down enough where they could get out and start doing some work. By that time, we had the crews organized so that could send them to certain areas, certain feeders, and they could start working.”

Even though the co-op anticipated the storm and took every possible step to prepare for it, the damage was worse than expected. “It was worse than what we thought it would’ve been because the eye went through the middle of our system,” Howard says. “Part of our system got hammered big time!”

Colquitt’s system had taken a huge hit, and as the storm settled down, Colquitt’s crews knew they had their work cut out for them. Out of the 65,000 meters on the utility’s lines, 38,000 were out of service. According to Howard, “We did have several transformers that burned up, but that wasn’t the bad part. The bad part was the wind with the trees knocking the power lines down. We had to cut the trees off the line and pick the power lines back up, straighten them up, and replace the broken poles.”

Storm damage like this is common with hurricanes. For Colquitt EMC, one of their biggest hurdles in restoring power was clearing trees off of downed lines.

Already a combined SEDC and Futura Systems’ customer for the past three years and having positive experiences with both SEDC’s UPN software and Futura Systems’ Outage Management System, Colquitt EMC turned to the software and supporting team to restore power quickly. FuturaOMS offered the opportunity to prioritize according to the number of customers out on a particular case, a feature that Colquitt EMC’s Manager of Engineering Charlie Tucker lauded. “OMS cut at least a full day off restoration time, maybe a day and a half.” Howard agrees, “It just made everything flow that much easier.”

Under the advice of Futura’s VP of Business Operations Chris Lahman, the co-op ran the new OMS 3.00.103 system update just before the storm. Colquitt EMC’s Manager of Information Technology Jeffery Patterson says, “We were on the schedule to do the update later because it was relatively new, but Chris assured us that OMS would run faster. We had trouble waiting for a ticket to close out, and that’s one of the things 103 addressed.”

Patterson also worked heavily with Chris Lahman and Donald Vick, Futura’s Manager of OMS Operations, as they monitored the storm and helped out as needed. Patterson recalls, “If we had questions, Futura was there. I never had to wait. I was never in a call queue. I’d pick up the phone and get a hold of somebody. The person that needed to help me answered the phone.”

The use of FuturaOMS software along with the recent software upgrade made it possible for the utility to close out work orders quickly with fewer people. Fewer people doesn’t mean fewer jobs for this utility, it means less strain on overworked crews and on their payroll.

“Anytime you can work an outage and can get it done even quicker than before with fewer people, that’s a definite savings,” says Howard. “It just means fewer of us have to go in on the weekends and evenings.”

The Transition and Results

While Colquitt EMC is ultimately satisfied with the FuturaOMS storm recovery results, they look forward to streamlining their outage recovery process further, and part of that means reducing the data transmission load on their network connections. Patterson sees a definite correlation. “We’re looking to streamline to get OMS even faster. What we’ve found is not everyone is using maps, so we can run the no map versions. It takes some of the load off the system and gets faster updates to all the offices.” Howard adds that crews running no map versions “would be the ones mostly doing the pinging and closing out the cases.”

In addition to running no map versions, the co-op plans on streamlining work orders to run out of separate districts so that each district only sees their outages. Howard sees the benefit of making the change. “Most of the time outages are run out of our home office, but with this big storm, our Tifton District and our Valdosta District would work their outages and we would work our outages.”

Colquitt has taken notice of the important part social media can play in effectively connecting and serving the needs of their customers. “This is our first big outage since social media, websites, and twitter have become popular,” Howard states. Now, the utility is looking to merge Futura’s OMS solution capabilities with real-time storm notifications their customers expect. Lahman adds, “They’re looking at now going with our outage web map that can be published out to the customer so during these types of storms they can be displaying where the problems are.”

Colquitt has tested Futura’s Outage Management System under extreme conditions and has experienced how powerful the use of the software can be during a major storm. Fresh off a successful storm recovery, Colquitt looks to the future and wants to continue improving their outage response time. The co-op remains a strong supporter of ongoing training for their office staff and field crews, and they’re working with Futura to better arm their crews with Futura’s FieldPro and transitioning from their current use of laptops to tablets, giving their FSR’s more mobility in the field. According to Howard,

“The cost and manpower savings are enough to offset the cost of OMS, especially during this last hurricane and a few of the larger storms that we’ve had.”

This could be you

"It enables us to do so much more, much faster, at significantly lower overhead."