“This was one of the easiest technology implementations we’ve had. Everything ran smoothly and timely.” 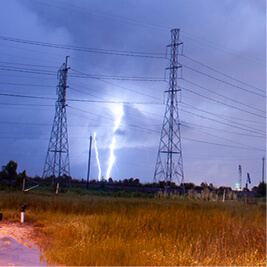 Located on Mississippi’s Gulf coast, Coast Electric Power Association provides electricity to Harrison, Hancock and Pearl River counties, in a region infamously known as “Thunderstorm Alley.” According to a report by Live Science, the area averages 18.0 lightning strikes per square mile, 856,384 strikes per year, and ranks as the 14th deadliest state for lighting strikes. According to the National Weather Service, there have been three lightning strike fatalities in Mississippi in 2016 and an average of 10 per year since 2006.

“We love our gulf breeze,” said Jeremy Bond, Coast Electric’s Senior System Engineer, “but we pay for it.”

Coast Electric’s GIS supervisor, Jay Santinelli, said the inland clash of humidity with water temperature is the perfect recipe for thunderstorms and lightning. From 2014 to 2016, Thunderstorm Alley saw even more lightning strikes and severe weather, causing the number of power outages to skyrocket and leaving Coast Electric with a large amount of work.

Coast Electric first saw a huge surge in maintenance issues and power outages for residents along the Mississippi coast following Hurricane Katrina in 2005. From 2005 to 2016, Coast’s business and their service area grew to encompass a wide variety of terrain. Bond said the co-op’s footprint now consists of a lot of rural areas and a growing number of urban areas, too, including the cities of Biloxi and Bay St. Louis.

The increasingly high likelihood of storm outages in the region combined with the growing number of members they serve presented a double challenge to Coast. The co-op needed a solution to help workers communicate with each other quickly and efficiently to fix outages and to navigate service areas safely.

“Using AVL combined with OMS makes the decision-making process simpler and quicker because it’s visual for us,” said Santinelli.

As a user of Futura products for many years, the co-op has seen added benefits since integrating SEDC’s AVL technology. AVL allows the co-op’s dispatchers in the control room to map the locations of employees’ trucks out working on outages. Futura’s intuitive graphical user interface displays outage calls, cases, trucks, notes, and switching in real-time, so dispatchers can provide technicians with details on their tasks and job sites.

With AVL integrated with their OMS, Coast can simultaneously locate vehicles and outages. Bond said he saw firsthand in the control room the importance of integrating AVL with OMS. “The dispatchers were seeing the trucks on the work management side and immediately asking if they could get this on the outage map,” he said, “So, Futura and SEDC worked together to make it happen.”

Coast first implemented SEDC products in 2005. Because SEDC had consistently brought positive results for the co-op, the decision to implement their AVL technology was not hard.

“We knew the support was going to be there,” said Santinelli, “the support had already proven itself prior, so it didn’t really make sense to look elsewhere.”

The integration of AVL with OMS has enhanced Coast Electric’s communications, safety and most importantly, member satisfaction, their number one goal.

“Anybody that dispatches outages immediately sees the benefits of working from a truck that’s responding to outages on a real-time map,” said Bond. The technologies allow Coast to find the fastest routes to the outages so jobs get done faster.

“Using AVL combined with OMS makes the decision-making process simpler and quicker because it’s visual for us,” said Santinelli.

The integrated approach also provided another layer of safety for technicians while they’re working. Now, the control room is able to keep an eye on employees’ work trucks at all times. “From the control room and dispatch office, this tool is definitely used for safety and communications,” said Bond.

“Futura continues to improve their technology and its capabilities,” said Santinelli, “and we see it as beneficial for us to continue using it moving forward.”

The co-op has also reduced the number of phone calls that have to be made in a day to keep up with where technicians are, when they have completed repairing an outage, and which location they’re headed to next, because all of that information is on the real-time map.

“This was one of the easiest technology implementations we’ve had,” said Bond, “Everything ran smoothly and timely.”

Coast Electric plans to continue using SEDC and Futura products because of the success they have seen thus far.

In an era of increased severe weather incidents and ongoing economic pressures as the region continues to rebuild following the damage and devastation of Hurricane Katrina, Coast Electric has found AVL and OMS to be two key technologies helping the co-op to keep its commitment to get residents’ lights back on quickly.

“Members want and deserve to have their lights back on as quickly as possible. This helps us achieve that goal,” says Santinelli. “If it wasn’t an approach that is good for our members, we wouldn’t be doing it.”

This could be you

"This was one of the easiest technology implementations we've had."